It is natural for the temperature of the body to vary. Most people have an average temperature in the mouth of about 37 c; it is a little lower in the armpit and the rectum a little higher. How to Nursing a Sick Child? A high temperature indicates illness, but a child can be seriously ill and yet have a temperature that is only slight, raised, normal, or below average. 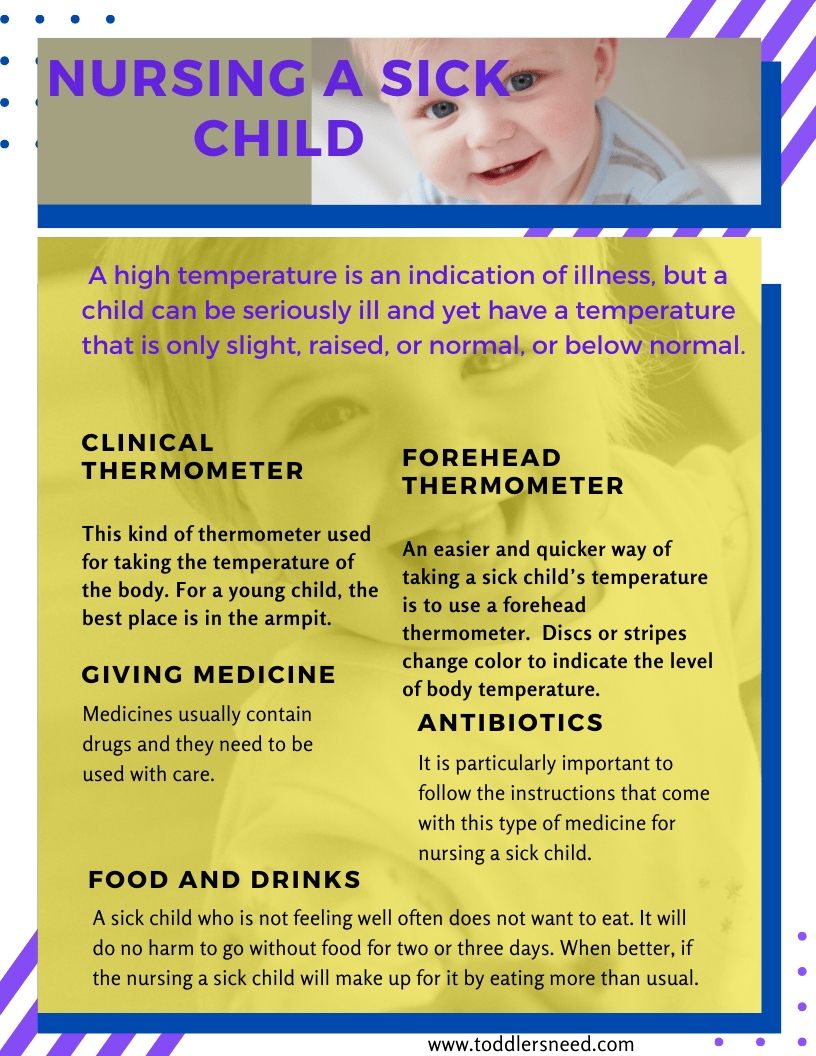 This kind of thermometer is used for taking the temperature of the body. The arrow indicates the average normal temperature. It is not safe to put a thermometer under the tongue until the child is about five years old. For a young child, the best place is in the armpit.

When Taking the Temperature:

An easier and quicker way of taking a sick child’s temperature is to use a forehead thermometer. This type of thermometer is made of thin plastic held against the forehead. Discs or stripes change color to indicate the level of body temperature.

Medicines usually contain drugs, and they need to be used with care. When giving treatment to a sick child (or anyone else)

Medicine has taken by mouth; every effort should be made to get a child to take medicine willingly. Ways of persuasion include:

When the force is used to get the medicine into the mouth, the child will be sure to fight against it every time. It is dangerous to force treatment down a child’s throat when he is crying if he inhales it.

Generally, children under the age of 5 years are unable to swallow tablets, in which case they need to be crushed first and then given in a teaspoonful of milk or jam.

The drawing shows three of the many different kinds of antibiotics. Antibiotics are medicines used for treating diseases caused by bacteria and fungi. It is essential to follow the instructions for this type of medicine for nursing a sick child.

It is also essential to complete the course of treatment even if the symptoms have disappeared, as not all the germs may have been killed, and the disease can start up again.

Antibiotics must never be stored and used later as they lose their effectiveness with time.

A sick child who is not feeling well often does not want to eat. It will not harm to go without food for two or three days. When better, if the nursing a sick child will make up for it by eating more than usual.

While there is no point in forcing food into a child who is ill, he should be given plenty to drink, especially if feverish. This might mean offering favorite drinks, making special fruit drinks, putting ice in, using a drinking straw, or flavoring milk to make it into a milkshake.

Preventing the spread of infection

If a child is suffering from an infectious disease, the parents should try to prevent it from spreading to others:

Much of an adult’s attitude to illness is learned in childhood. A child learns in two ways:

All children, at one time or another, have spells of not feeling very well when they have a cut knee, sore throat, cold, headache, etc. If the mother or father becomes worried over every ache and pain and keeps talking about it and making a great deal of fuss, the child will think it very important and learn to worry in the same way.

If instead of worrying too much, the parents put their energy into keeping the child happy and occupied, he is unlikely to grow up over-anxious about his health.

If nursing your sick child, then listening to them is the essential factor to do. Most children don’t want to stay in bed unless they are very ill. If they think they don’t have to be in bed, they should not. They may be feeling better with a pillow or pillow on the portable toddler travel bed.

When you need to get on with some household work, keep the patient nearby and use mattresses, pillows, and blankets to set a portable bed.

It will also stop them from getting from under the bed to search you when they’re feeling alone and afraid and using a’ portable’ bed; however, they will feel much better because they’re next to you and they can chat away as you get on with some of those’ work’ that won’t wait.

1 thought on “How to Nursing a Sick Child? Children Health”